0
Shares
By David M Williams
Out of nowhere, an independent software developer has produced his own fast and fancy netbook operating system. It promises lightning boot times, an iPhone-esque icon-studded interface, modern cloud apps. The secret ingredient is Linux.

Netbooks are a way of life. Who'd have thought even just two years ago that what punters really wanted was low-cost dinky little laptops? Yet, since the release of the original 7” ASUS Eee just before Christmas 2007 the market has exploded.

Sure, the desktop market is still pounding down the door for multi-core multi-bit massive-capacity hardware, but the trend to more power hit a surprising roadblock when low-powered netbooks began flying off store shelves.

Yet, here's the thing: pretty much every netbook has a sucky interface in some way. First, you have the Linux bunch – the ones that kicked the market off. Each of these, including ASUS' Eee as well as models by other vendors, all shipped with a custom distro.

On the one hand, these custom distros made sense; the units were for the general public and while power users could change things around and fire up a command prompt, there was a real need to have a simple look and feel which would launch programs, manage documents and so on.

Yet, on the other hand, each of these were different to the other. That also makes sense; they were produced by different vendors specifically for their own products and Linux comes in a rich variety of releases anyhow, so even without modification they were fairly dissimilar anyway.

Linux experts generally put on their own distro of choice so the software that shipped didn't bother them. This then leaves those who aren't as familiar continuing to use the out-of-the-box software.

Here's where Microsoft Windows came in. Just when Linux advocates like myself were touting 2008 as the year where Linux became mainstream thanks to netbooks the situation got all topsy-turvy.

Let me tell you about it - and then about Jolicloud, a new OS which looks set to turn the tide. More overpage, and a real live screenshot on page 3.

Netbooks were and are attractive because they were relatively low-cost. Part of the cost saving was because Linux had no licensing fees. Yet, consumers showed they'd rather pay extra to get an operating system they were more comfortable with, in particular Windows XP.

Ironically, even though many buyers decided they preferred a familiar Microsoft environment, it wasn't Windows Vista which could cut it.

Vista, considered by many the bastard child of Windows ME, has a raft of defects. Not least of these as far as netbooks are concerned is the heft of hardware muscle needed to run it effectively. And for that you're talking about regular laptops, not teensy tiny netbooks.

So from both sides of the camp there's clearly been a beauty problem. Whether you use the getting-on-to-a-decade old Windows XP, or a Fisher Price windows manager slapped on to a random Linux distro, it's clear your netbook probably isn't really showing off its best assets.

Think about it: a netbook is tiny. It's light. It is low-powered. It's not going to run World of Warcraft or AutoCAD. Yet, it will let you surf the web, read the headlines on iTWire, check Gmail, buy and sell on eBay.

What's more, with a modern trend by companies towards web-delivered applications and storage – increasingly known as “cloud computing” - the netbook really is uniquely positioned to be something totally special.

You won't store all your family photos on it. You probably won't write your novel on it. But you will take it wherever you go with ease.

There's another device which has taken advantage of the concept of being always connected. Well, ok, there's a few – the BlackBerry, the Hiptop/Sidekick and others – but I'm thinking specifically of Apple's iPhone.

So just what is Jolicloud and what does it look like?

I'm glad you asked! Read on!

It doesn't need to have disk storage, it doesn't need a full-sized keyboard. Heck, Apple think it doesn't even need cut-and-paste. Yet, it's a success because it's portable and it's always-connected. It's a portal to the world of online computing.

Here too is where the netbook ought to shine. And that's why Tariq Krim has begun developing his own operating system called Jolicloud.

The idea behind Jolicloud is that users will download it to their netbook and kick it off. Whatever was previously installed will be totally wiped and replaced with a stripped down Linux variant with a bold icon-driven user interface and very little fluff.

Sure, another Linux variant! Why should this succeed when others didn't? The main reason is because Jolicloud is based on the lessons learned from these other vendors. Obviously ASUS had no prior experience of netbook usability to work from when they sent their first Xandros-derived system to the public.

Further, Jolicloud is crafted with the specific goals of enhancing usability and of being totally up-to-date with advances in cloud-based computing. In short, it aims to be a one-stop modern netbook OS for these tiny computers no matter the maker.

Sadly, there's no release date yet but Krim has tweeted that the software presently works perfectly on all Atom-based netbooks.

You can sign up to be kept informed on Jolicloud's web site – and we'll be sure to give it a full review here at iTWire too. 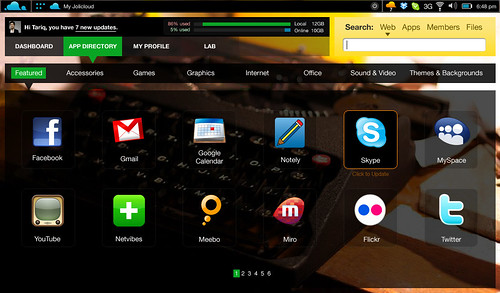 More in this category: « Linux Australia election results are in - but is there a mandate? Congratulations Mr President - Linux Australia goes to the vote »
Share News tips for the iTWire Journalists? Your tip will be anonymous